The Borealis Alliance Free Route Airspace programme has been awarded a coveted prize by the European Commission for its contribution to delivering the Single European Sky.

The programme, which will see a single flight-plannable area of Free Route Airspace covering nine North European countries by 2021, was one of a select number of projects recognised by the Commission in its inaugural Single European Sky awards. The awards have been established to recognise programmes that are making a significant contribution to making air travel in Europe greener, cheaper and more efficient. 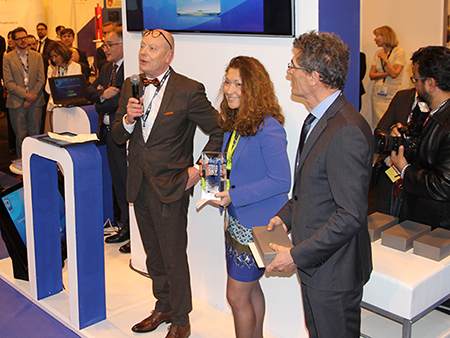 EU Commissioner for Transport Violeta Bulc said "The fragmentation of the European sky is costing us €5 billion a year and millions of tonnes of unnecessary CO2. Completing and implementing the Single European Sky is therefore an absolute priority of my mandate, and we gave it a new push with the Aviation Strategy we adopted last December. But to succeed, we need to get all stakeholders on-board.

I very much welcome the Free Route Airspace to be set up by the BOREALIS project by 2021. It will allow airlines to plan their preferred routes across 9 European countries, thereby saving 70.000 tons of CO2 and 15 million euro in management costs annually. This is the type of initiative we need to make important contributions to a better and smarter management of our sky. I wholeheartedly congratulate the BOREALIS alliance and all the winners of the SES Awards 2016"

Commenting on the award, Olle Sundin, Chair of the Borealis Alliance Board, commented: “We are delighted to have been recognised by the Commission in this way. This is a voluntary collaboration by the Alliance members for the benefit of our customers and will make a significant contribution to the Single European Sky.”

Branka Subotić, Executive Director of the Alliance, added: “This award is recognition of all the hard that work that the nine ANSPs have put into this initiative. We have a long way still to go but have made a great start and look forward to working with our customers, regulators and others to make sure that the Borealis Free Route Airspace programme delivers and makes flying in Europe cheaper, safer and greener for our customers”.

The Borealis Free Route Airspace programme is a voluntary collaboration between Air Navigation Service Providers from three Functional Airspace Blocks (FABs), plus Iceland. It will enable airspace users to plan and take the most cost effective, fuel efficient and timely routes across the entire airspace managed by Borealis members rather than following pre-defined ‘routes’ within each member country’s airspace, saving time, money and fuel.

The programme will build on work initiated through the three existing Functional Airspace Blocks (FABs) – the Danish-Swedish, UK-Ireland and North European FABs – and the North European Free Route Airspace (NEFRA) programme, but is voluntarily being expanded by the ANSPs to maximise the benefits for customers.

Overall, it was a great night for Borealis Alliance members, with four of the five awards going to projects involving either some or all of the Borealis members. As well as the award for the Borealis Free Route Airspace programme, the IAA, LFV and Naviair won an award for their involvement in COOPANS, a leading industrial ATM system collaboration, which is reducing costs and harmonising system development between members; LFV won the award for their world-first remote tower deployment; and NATS won for their deployment of Time-Based Separation at Heathrow airport, also a world-first.

The Borealis Alliance is the leading Alliance of Air Navigation Service Providers (ANSPs) that enables its Members to drive better performance for stakeholders through business collaboration.

The Alliance includes the ANSPs of Denmark, Estonia, Finland, Iceland, Ireland, Latvia, Norway, Sweden and the UK. Combined, they provide air traffic services for 3.8m flights a year, across 12.5 million Km2 of north European airspace. Between them, they form Europe's major transatlantic gateway.

The Borealis Alliance Free Route Airspace programme will enable airline and business aviation customers to plan and take the most cost effective, fuel efficient and timely routes across the entire airspace managed by Borealis members saving time, money and fuel by 2021.


Cookies are necessary for this site to function, but also gives us information about how the site is used, so we can make improvements, both for you and others. Cookies on this site are mainly used for measuring traffic and optimizing the site’s content.
By continuing to browse through this site, you are accepting the use of cookies.
If you would like to know more about cookies, or how you delete them, click here.